BleedingCool.com links HERE to read the 5-star review of our book by Robert J. Sodaro, a well-known writer on comic books and the medium's history. His original review appears on the Examiner.com website. Here's some of Sodaro's commentary:

"This is an amazing book, as well as a wonderful addition to anyone’s library who wishes to know more about this amazingly unique art form we call comics"

"Blake Bell and Dr. Michael J. Vassallo...not only gives us a completely new look at something that many of us “old timers” always knew, but actually presents us with an alternate theory of why Jack Kirby and Steve Ditko left their long-time associations with Marvel."

"For page after page of this well-written, very informative, and thoroughly entertaining book, the authors go on to point out that Goodman was more interested in making money than in either producing anything of any quality, or paying other people to produce anything that he was selling (Goodman famously once stated that fans weren’t interested in quality)."

Special Offer!
If you haven't taken the plunge into The Secret History of Marvel Comics, click HERE for an offer of the book, along with Impossible Tales: The Steve Ditko Archives vol. 4 and Heroic Tales: The Bill Everett Archives vol.2, all for $99, which includes shipping within Canada and the U.S. (an ~$145 value).
Posted by Unknown at 3:25 PM No comments:

Email ThisBlogThis!Share to TwitterShare to FacebookShare to Pinterest
Labels: Reviews

Email ThisBlogThis!Share to TwitterShare to FacebookShare to Pinterest
Labels: Sales

1st Major Review of the Book

Click HERE to read 1000+ words on comicsworthreading.com, dissecting the book from every angle.

"The Secret History of Marvel Comics is a stunning book (in more ways than one) of beauties, beasts, and bombast, as well as a wonderfully askew look at the Precambrian Era of Marvel Comics."

"This book is the amazing and highly captivating history of that publishing 'dynasty'."

"...what’s been unearthed here (much of it never reprinted) is both visually and historically stunning."

"Written by comic book historians Blake Bell (Strange and Stranger: The World of Steve Ditko, Fire and Water: Bill Everett, The Sub-Mariner, and the Birth of Marvel Comics) and Dr. Michael J. Vassallo (extensive notes for the Marvel Masterworks series and an upcoming bio of artist Joe Maneely), who have both dug deep for this book. (Comic history wonks will love the detailed Endnotes section, which unveils deeper information.)"
Posted by Unknown at 2:18 PM 1 comment:

Email ThisBlogThis!Share to TwitterShare to FacebookShare to Pinterest
Labels: Reviews

The Clash over "The Secret History Of Marvel Comics"

Mark Judge just gets me.

If you've obtained one of the early copies of the book, you've seen that 1941 photo of Marvel Comics founder/owner Martin Goodman holding a color proof for the cover to Captain America Comics #11. (Click on the image to your left to enlarge.)

It's a fascinating photo for a number of reasons. First, it's one of the earliest photos of Martin Goodman that has ever been published. (It's only surpassed in age by the two 1940 New Year's Eve photos we also have in the book.) One of my favorite parts of our book is that we were able to track down seemingly every photo ever published containing Martin Goodman's visage. Each photo that popped up when Michael found another Martin Goodman magazine was a revelation.

There are actually more photos of Goodman in the 1950s, when he began his line of movie magazines, and started hobnobbing with Hollywood stars. My personal favorite in the book is the shot of him and Charlton Heston. Why? Because Heston played Moses in The Ten Commandments, and one of the facts that we uncovered for the book is that Goodman's birth name was also Moses. In fact, Goodman's parents seem to pillage the Bible when landing on names for their kids.

The second most interesting aspect of this photo is when it was taken. Joe Simon and Jack

Video Read-Through of the Book 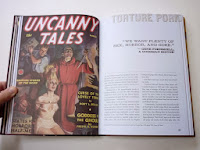 Did your comic-book store get copies of the book yesterday? Some did, and some of you are waiting until Amazon.com ships on November 16.

But if you want a quick video read-through of the book, check out the book's YouTube page. You can also see a ten-part video series on the making of the book, plus more exclusive video content, such as "The Martin Goodman Exhibit" and footage of the New York City Book Release Event on October 12, 2013.

There's a number of avenues where you can grab a sneak peek of the book:
1) 23-page .pdf excerpt, including the introduction and first chapter.

2) Flickr Photo Album, with numerous still shots of the book.

4) Fantagraphics Home Page for the book.

Talkin' with Al Jaffee in NYC

Artist Al Jaffee began drawing for comics as far back as 1941, long before his legendary contributions to Mad Magazine, which included his signature Mad Fold-In back covers, and Snappy Answers to Stupid Questions.

He began working for Stan Lee at Marvel Comics (then known as Timely Comics) on the funny animal strips, like Ziggy Pig and Silly Seal, and finished his run there in the mid 1950s as the long-running artist on the Patsy Walker book. (Click on the image to your left to enlarge it.)

We were thrilled to have him join us for the book's release event last Saturday, and it was even more fascinating, at the dinner beforehand, to listen to him regale us with stories about his earliest days in comics.

Posted by Unknown at 7:40 PM No comments: