If you've obtained one of the early copies of the book, you've seen that 1941 photo of Marvel Comics founder/owner Martin Goodman holding a color proof for the cover to Captain America Comics #11. (Click on the image to your left to enlarge.)

It's a fascinating photo for a number of reasons. First, it's one of the earliest photos of Martin Goodman that has ever been published. (It's only surpassed in age by the two 1940 New Year's Eve photos we also have in the book.) One of my favorite parts of our book is that we were able to track down seemingly every photo ever published containing Martin Goodman's visage. Each photo that popped up when Michael found another Martin Goodman magazine was a revelation.

There are actually more photos of Goodman in the 1950s, when he began his line of movie magazines, and started hobnobbing with Hollywood stars. My personal favorite in the book is the shot of him and Charlton Heston. Why? Because Heston played Moses in The Ten Commandments, and one of the facts that we uncovered for the book is that Goodman's birth name was also Moses. In fact, Goodman's parents seem to pillage the Bible when landing on names for their kids.

The second most interesting aspect of this photo is when it was taken. Joe Simon and Jack
Kirby put together the first ten issues of Captain America Comics, but were summarily fired when it was discovered that they were moonlighting for (what is now known as) DC Comics. Issue #11 is the first issue after that, with a cover penciled by Al Avison. A likely candidate for inker is Syd Shores, who became the Captain America artist of the 1940s, and "leader" of the only true "Marvel Bullpen" that the company maintained (circa the late 1940s).

Both Avison and Shores are prominently featured in our book. The caliber of the work the two men did for Goodman's pulps and magazines far exceeded what they were doing in the comics. The same is true for most of the artists that crossed over, and this revelation was one of the true joys of putting the book together.

It's fascinating to imagine Goodman's mindset about "the talent" in his organization. He had this stunning success in Captain America - his first true breakout hit - thanks to Simon and Kirby, yet he had no qualms about dismissing them when he felt "betrayed" and turning the book over to another artist in his stable.

And Goodman wasn't just firing a couple of artists working on one book. As we discuss in the book, Simon was also the editor of many Goodman magazines, and Simon and Kirby were really managing the talent and intake of comic-book material. To Goodman, however, everyone was replaceable (perhaps with the exception of Stan Lee).

The third aspect that is unique about this photo in the book is who provided it. Jason Goodman is the grandson of Martin Goodman (and son of 1970s Atlas Comics publisher, Chip Goodman). He gave us permission to use the photo, and he showed up at our October Book Release Event in New York City. Check out the inside cover spread below of Michael's copy of the book. You won't see this combination too often - autographs by Jason and artists Al Jaffee and Stan Goldberg. 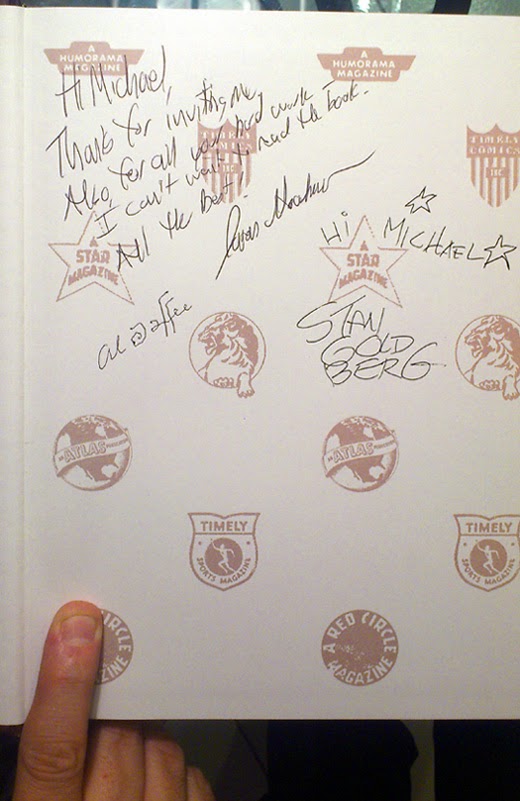